Situated at 14.5 km distance from Haifa, the village of 'Ayn Hawd lay at the foot of a prominent hill in the middle of the western slopes of Mount Carmel, overlooking the coastal plain and the Mediterranean. A secondary road about 1 km long linked it to the coastal highway. It was believed that 'Ayn Hawd was established by Abu al-Hayja', a major commander under Salah al-Din, who died after the battle of Hittin in 1187. In the late nineteenth century, 'Ayn Hawd was a small village situated at the end of a spur, inhabited by fifty people who cultivated 3 faddans. It had a rectangular outline, with stone houses clustered together in the centre, and as the village expanded it divided into eastern and western quarters (haras). There were a number of springs in the vicinity and also within the village, and 'Ayn Hawd also had a coffee shop and a diwan which served as a meeting place. An elementary school for boys was founded in 1888.

The residents of the village were Muslims. They maintained a mosque in the centre of the village, and had as main means of livelihood livestock breeding and agriculture, based on grains and olives. The village was known in the region for its carob which had a distinctive flavour and aroma, and was used to make molasses. Wheat, carob, and sesame were sold by the villagers in Haifa and Acre, as well as building stones and whitewash. The khirba (ruin) of Hajla, to the southeast, contained the foundations of buildings, dressed stones, and rock-hewn cistern.

Occupation, Depopulation, and Israeli Settlements
According to the Palestinian newspaper Filastin, a force of 150 Jews struck at 'Ayn Hawd and the neighbouring village of 'Ayn Ghazal on the evening of 11 April 1948, followed by a more serious attack the following month. Both attacks were repulsed, and the villagers of 'Ayn Hawd remained in their village after the fall of Haifa in late April. In late May, 'Ayn Hawd was stormed by Israeli forces, after Arab snipers had allegedly halted traffic on the Tel Aviv-Haifa road. Even though 'Ayn Hawd and 'Ayn Ghazal had been broken into on 20 May, the residents of 'Ayn Hawd continued to stay put.

'Ayn Hawd was probably one of a number of villages south of Haifa (including al-Tira, Kafr Lam, and al-Sarafand) which were occupied in an operation launched during the 'Ten Days' period between the truces. If this is the case, it fell to Israeli forces around 15 July 1948, in an operation in which the Israeli naval force also participated. According to the History of the War of Independence, the naval force assisted the land-based attackers by providing covering fire and by bombarding the villages. Historian Benny Morris indicates that the inhabitants may have been expelled southwards or sent to POW camps, as have the villagers of nearby al-Tira.

The Village Today
'Ayn Ghazal has not been destroyed, but used instead as an artists' colony since 1954, and designated as a tourist site. What used to be the village mosque is now the 'Bonanza' restaurant/ bar. The lands around the site are cultivated, and the surrounding forests are used as parks.

Those few villagers who did not leave the country as refugees chose to stay nearby and build a new village, also called 'Ayn Hawd. The village was not legally recognized by the Israeli government, and therefore denied all municipal services, such as water, electricity, and roads. Moreover, in the 1970s the Israeli government erected a fence around this new village in order to prevent it from expanding, and then in 1986 it threatened to demolish three of its houses. A new mosque was built to replace the old one. Muhammad Abu al-Hayja, the son of a leader of the old village, represented the new village in its struggle to win municipal status, the position being then taken after his death by Mubarak Abu al-Hayja.

Although in 1994, 'Ayn Hawd and three other Arab villages were officially recognized, they further faced another problem. As land use in Israel is strictly monitored by the state through the use of 'master plans' that determine zoning, development, and construction, the villages had been 'deemed' unrecognized' because they had been ignored on the regional master plan. The villagers put forward a plan of their own, but when the official master plan was released in 2005, the village had only been allotted a minimal amount of land. Furthermore, in order to get access to services the villagers would need a license, which requires the signature of the land owner on the master plan. 'They confiscated the land in 1959', said Muhammad Abu al-Haya, 'and the land is owned today by the government, and the government will not sign for any house unless we pay rent for one hundred years - about $200,000 for five hundred square metres of land. Not for houses, for land.' Needless to say that the villagers don't have access to such sum of money.

In December 2010, a devastating fire ravaged the forests of Haifa, as well as houses of both the old and the new 'Ayd Hawd, forcing many villagers to leave their homes. 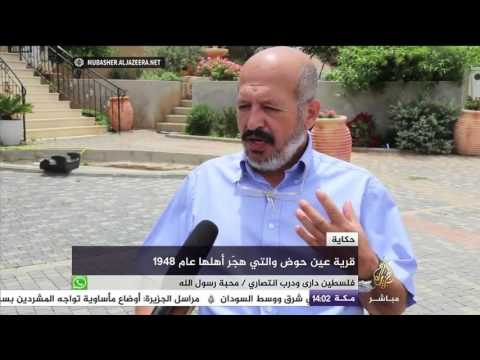 Conflicted Space
By: Danit Shaham
09/2012
The book reveals that the neutrality is only apparent, demonstrates the degree to which our space is the product of design and...

Photographing what remains of villages after the Nakba: An event concluding the exhibit “What isn’t...
By: Eitan Bronstein Aparicio
08/2012
The photographic act allows us to try to reclaim ownership of places that have been taken over by the state.  The photographs...
5429754208

Searching for the lost Palestinian villages
By: Moshe Gilad (also photos)
31/10/2012
I’d been there dozens of times in the past. I never noticed the Sheikh’s Tomb standing on the manicured lawn. I didn’t see it....

The forest through the trees: What the Carmel fire reminds us about Israel’s history
By: Max Blumenthal
30/11/2010
Most of the original inhabitants of Ein Hod, which was called Ayn Hawd prior to the expulsions of '48, and was continuously...
5448651193